Smilegate Entertainment, creators of the blockbuster billion-dollar franchise, CROSSFIRE, celebrates the 10th event of its CROSSFIRE STARS Grand Finals, the most prestigious CROSSFIRE esports competition, that began in 2013.

“In the early days of CROSSFIRE esports, Chinese players and teams dominated the league. Now, there are strong teams with heritage from Brazil, Germany, and Egypt are showing great performance,” said Brandy Yeo, Director of CROSSFIRE esports at Smilegate Entertainment. “On 2021, team CELEBe.2L from Vietnam made their way to the semi-finals, beating top tier teams from various regions. Although there have been some challenges with in-person events, we’ve found new ways of holding our esports competition and CFS has just completed its 10th event and continues to be one of the most-watched FPS esports tournaments.”

CROSSFIRE, a first-person shooting game that launched in 2007, is currently played in more than 80 countries around the world, has 670 million total registered users and 8 million concurrent players worldwide with a total of 1 billion cumulative.

CFS is the CROSSFIRE-based global esports league that is enjoyed by more than 30 Million viewers and records an average viewership of 20 million people for each event. Launched in 2013, CFS continues to expand in such places as China, Europe, South America, Middle-east / Southeast Asia and Africa. 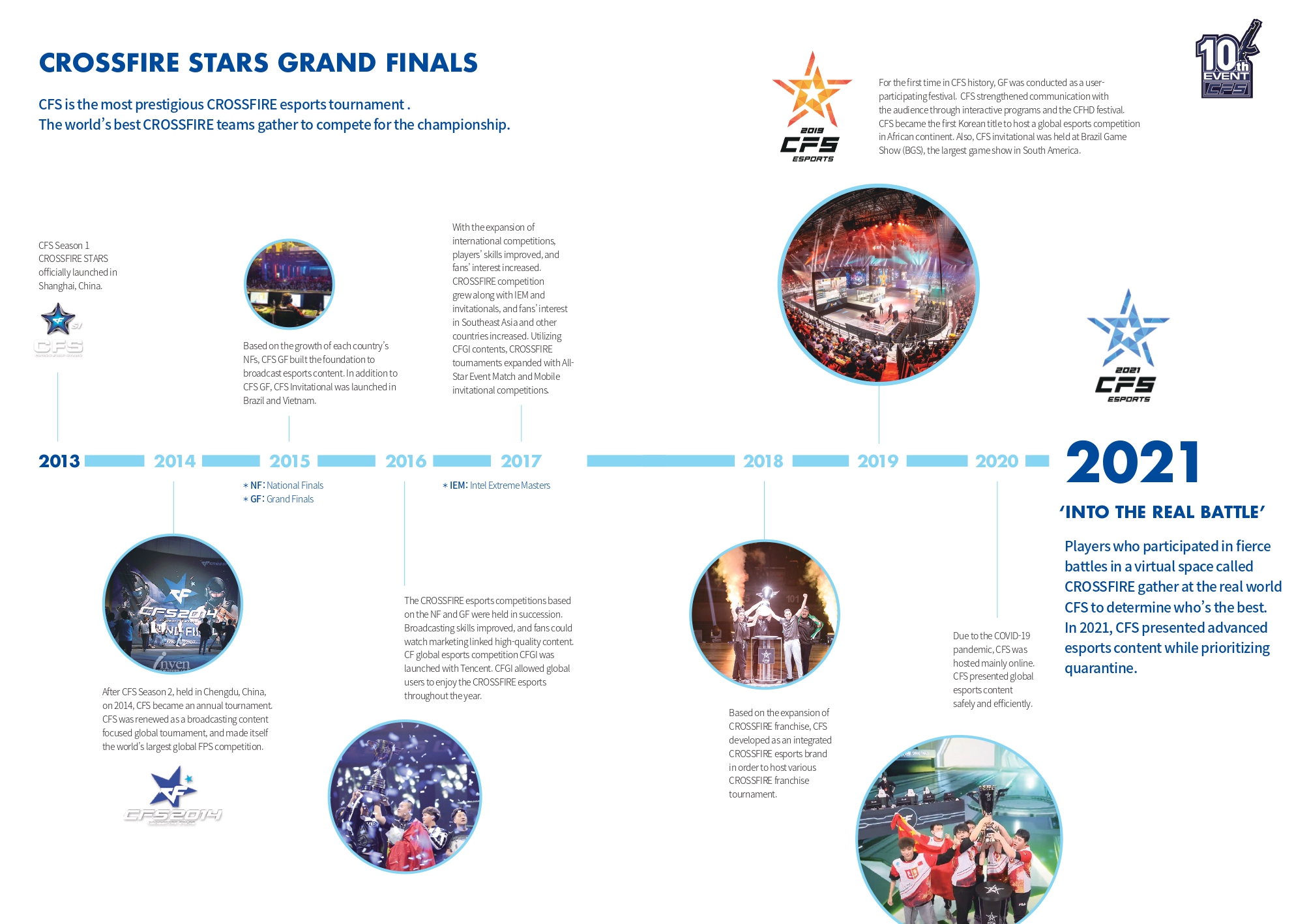 • 2018: The CFS brand and Grand Finals were integrated and held seven times in a row, creating the multi-sports esports league

• 2019: CFS Esports was conducted as a user participating festival

• 2021: CFS returned to live in-person events while prioritizing the health and safety of players

A detailed infographic providing a topline overview of CFS milestones since 2013 as well as other assets can be downloaded here.

Smilegate is a global game development and publishing company headquartered in South Korea with regional offices in the United States, China, and Europe. Its flagship franchise ‘CROSSFIRE,’ is one of the largest and most successful franchises in gaming history. It has more than 1 billion registered users to date in PC and mobile platforms and over 8 million concurrent players globally. Its latest project, ‘Lost Ark,’ is an MMORPG that was released in South Korea in 2019 and was launched in North America and Europe in February 2022. Lost Ark recorded the second-highest number for concurrent players ever tracked on Steam with over 1.32M. Learn more by visiting Smilegate.com