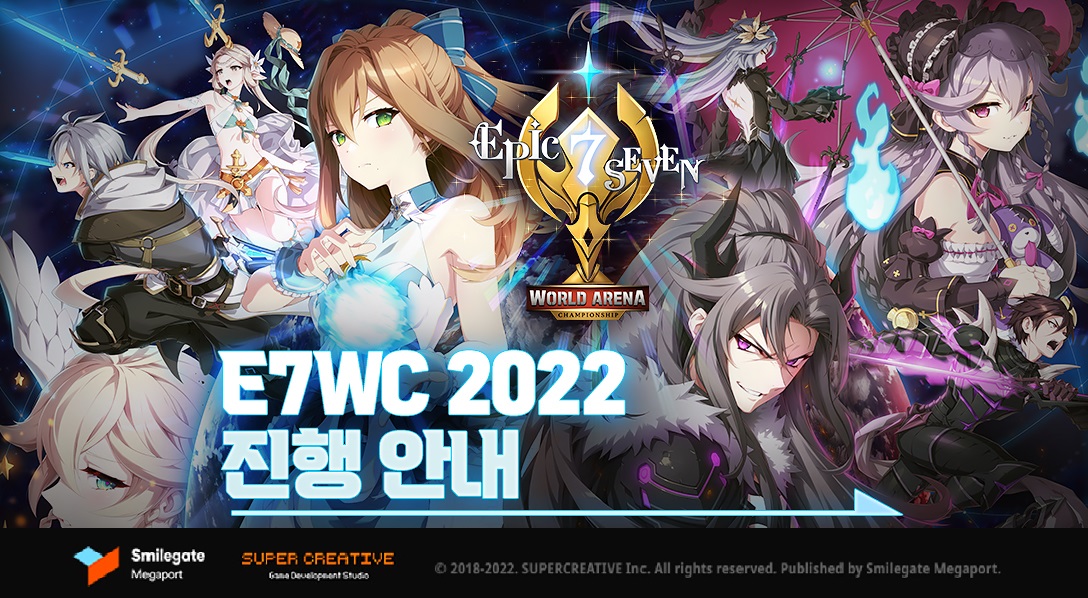 ■ Epic Seven's official global e-sports tournament has returned with a huge increase of a total prize money of 100,000 USD - Users around the world are starting to determine the strongest in the real-time arena

Global hit mobile RPG Epic Seven, serviced by Smilegate Megaport (CEO Ina Jang) and developed by Super Creative (Co-CEO Kim Hyung Suk and Kang Ki Hyun), announced on the 20th (Monday) the global e-sports competition ‘Epic Seven World Arena Championship 2022 (hereinafter referred to as E7WC 2022)’ to share with the fans of Epic Seven all around the world and the opening of the brand website.

Anyone over the age of 20 who has played the E7WC Preliminary Event Mode at least once can participate in the ‘E7WC 2022,’ which selects the strongest in the arena real-time among the users of Epic Seven around the world. Recruitment of participants will be until July 10. Afterwards, starting with the Korean server preliminary on July 23, preliminary rounds for ▲Asia, ▲Global, ▲Japan, and ▲Europe servers will be held, determining the eight players to go on the final stage.

The long-waited final will start on August 28, at noon Korean time. The winner of the final championship will receive a cash prize of 50,000 USD along with the honors of being the strongest Epic Seven PVP player. The total prize money is worth 100,000 USD, including 20,000 USD for runner-up and 10,000 USD for the third place.

All matches up to the finals, except for some of the preliminaries, will be livestreamed in Korean and English on the official channels of Epic Seven on YouTube and Twitch. The Epic Seven World Arena Competition where fierce battles take place using combinations of various heroes and artifacts, the ‘BAN’ system, and compatibility between heroes is expected to be the best festival in the summer season for Epic Seven fans around the world. In particular, from this year’s tournament, we have largely expanded the entertainment by introducing the observer system to view the information on players and matches and establishing a livestreaming system with XR (extended reality) and AR (augmented reality) technologies.

Starting with the ‘E7WC 2022,’ Smilegate Megaport plans to focus its capabilities to make the E7WC the world’s most beloved e-sports event in the world. To this end, strong foundations are being created, such as increasing the prize money significantly, introducing a new observer system, and establishing cutting-edge broadcasting system. In addition, we collaborate with streaming creators in Taiwan, Japan, and Europe to support livestreaming in various languages other than Korean and English.

Meanwhile, at 3 PM today, the official OST teaser of E7WC 2022 was released through the Epic Seven YouTube channel and received attention. It is a 18-second video in rock sound melody, and the official sound source will be released in the future.

Director Jung Jae-hoon of Smilegate said, “I am sure that Epic Seven Real-time World Arena has endless possibilities as an e-sports, as different variables occur every match, and fierce and strategic battles are played according to the combinations and synastry. For Epic Seven fans around the world, we will do our utmost to become the best festival in this summer season. Please look forward to the E7WC OST soon to be released.”

For details on Epic Seven, check the official community (http://page.onstove.com/epicseven/) and the official YouTube channel (https://www.youtube.com/channel/UC4dV8Fy1GiqjxU4OQ6ZoKWw).